Les Arcs is one of the French traffic-free, purpose-built resorts built in the 1960s and 70s, when large apartment blocks were in vogue – its jagged architecture divides opinions, with some claiming it to be a contemporary masterpiece while others prefer the more traditional chocolate-box charm found in the likes of Austria and Switzerland. The purpose-built nature of the resort means most accommodation is ski-in/ski-out, plus the connection to Bourg St Maurice makes it one of the most popular resorts with skiers who enjoy travelling by train to the Alps.For the skiing though, Les Arcs’ slopes are remarkably varied, with plenty to suit all standards from beginner to expert, including some steep ungroomed black runs and plenty of easy cruising runs. Experts will particularly enjoy the area. Most of its black runs are never groomed and become huge mogul fields, plus there’s lots of accessible off piste, with steep pitches on the front of the Aiguille Rouge and secluded runs off the back.Its ski area is linked to neighbouring La Plagne to form the huge Paradiski area. 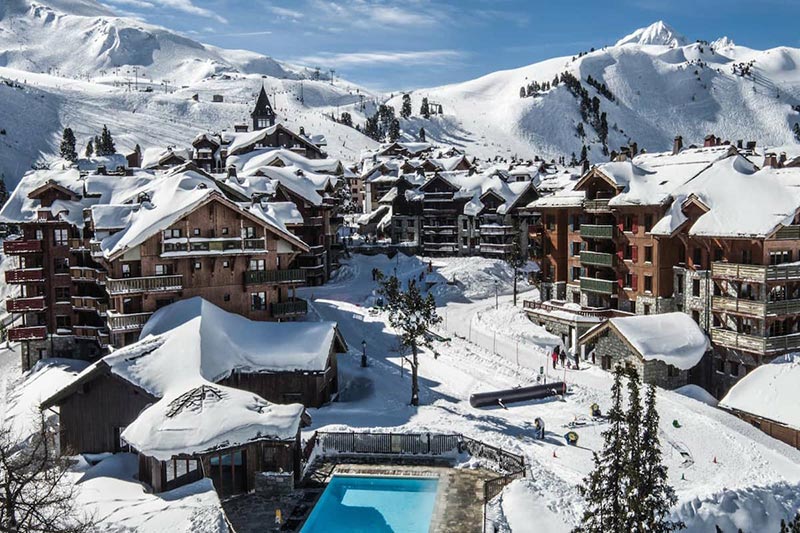 Spread over four village bases, the original Arc 1600, is set at the top of the funicular train up from the valley town of Bourg St Maurice. Then came Arc 1800 a few km across the mountain (and now the biggest village) and Arc 2000. More recent development has been in more sympathetic low-rise chalet style, including fabulous Arc 1950, built in the early 2000s by Canadian developer Intrawest who built Whistler. It is just below Arc 2000 and connected by a short gondola that runs until late at night and an excellent and extremely pleasant place to be based and wander around and definitely a big hit with families.

The Les Arcs ski area, with 200km of pistes on its own, is served by a quality lift system with lots of fast chairs and snow reliability is good, with lots of snow-sure runs over 2,000m and plenty of snowmaking. Views over the valley to the resort of La Rosiere and to Mont Blanc are stunning. The link to La Plagne is via the two-way double decker Vanoise Express cable car from Plan Peisey, high above the intervening valley. The joint Paradiski area has a total of 425km of pistes, putting it up there with the biggest ski areas in the world.

Arcs 1600, 1950 and 2000 are fairly compact and good for families. Arc 1800 is more spread out, with a number of the newer apartments being up the hill away from the centre. All Les Arcs’ villages have a decent selection of bars and restaurants, plus they are mostly ski-in/ski-out and it is easy to get between them on skis. Après ski in general is relatively quiet – Arc 1800 is the liveliest, followed by Vallandry, with a couple of nightclubs and some places such as Giovanni’s pub hosting regular live music. Among the bars in Arc 1950 are cosy George’s wine bar and British pub-alike Les Belles Pintes. As well as the village’s free events programme, bars here take it in turns to organise nightly concerts. For drinks on the mountain, there’s a fun ice bar and ice grotto with sculptures in the igloo village above Arc 2000, open until 5pm. The area above Arc 1800, with the lively La Folie Douce bar and eatery, has a fun ski slope for kids and a toboggan run that are floodlit until early evening. On the opposite side of the ski area near the link to La Plagne, Plan Peisey and Vallandry have been built in low-rise chalet style above the traditional old mountain village of Peisey, which is linked to the Peisey-Vallandry development by a bucket gondola lift. Both villages have limited bars, restaurants and shops.

The local Les Arcs ski area has plenty to keep most people of any standard happy for a week, with its 200km of nicely varied pistes above and below the treeline and lots of off-piste options.

More advanced visitors who like to cover as much ground as possible should take the double decker Vanoise Express cable car over to La Plagne for a day or two during their stay.

The resort operates an innovative lift pass system to broaden its appeal to skiers and snowboarders of all levels and of varying interest. Each of Les Arcs’ resort villages has its own local slopes linked into the others, a beginner area and easy blue slopes to progress to. Les Arcs has reclassified 10 of its easiest slopes, which are now marked green and ideal for beginners wanting to level the nursery field. All villages also give access to plenty of intermediate cruising on blue and red runs.

As regards accommodation there is an excellent choice of hotels and apartments with a few catered and self-catered larger chalets, pretty much geared for any budget. The nicest and most expensive of the apartments tend to be in Arc 1950 with a few more options dotted around. Plenty of packaged options too available including flights to Chambery, Lyon or Geneva with inclusive transfers, though Les Arcs is a popular choice for those driving here and those wanting to come by train which stops at the bottom of the ski area in Bourg St Maurice. A great choice for mixed ability groups, experts, families and couples.