Les Gets ski resort is a true mountain oasis, a pretty village which has managed to retain its uniquely Savoyard identity, despite lots of modernisation, while quietly reinventing itself as a slick modern and friendly ski resort. The first ski lift was opened in 1938 and the resort has never looked back. Families in particular love Les Gets. Just an hour’s transfer from Geneva airport means it is easy to get to, with the resort having great English-speaking ski schools and safe nursery slopes for the kids. In the village itself, free shuttle buses and motorised trains mean the streets tend to be car-free, something that adds to the welcoming, laid back atmosphere of a ski holiday in Les Gets. 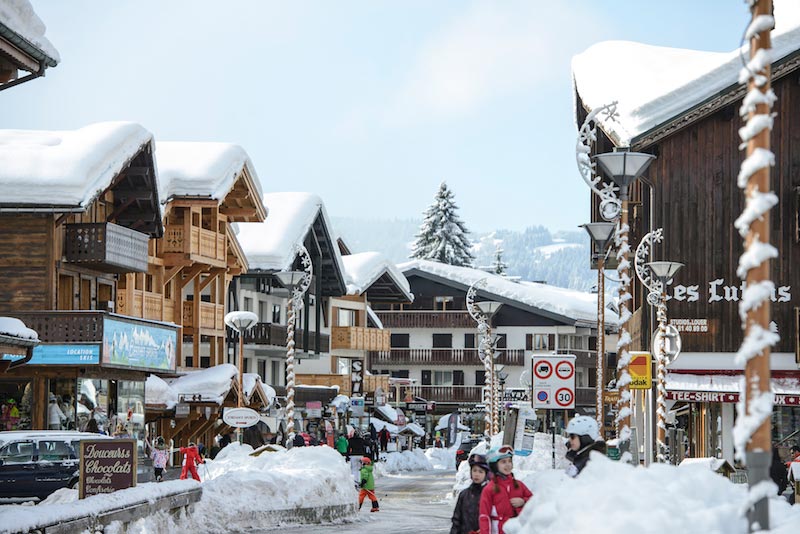 At first sight, the two areas that make up the Les Gets ski area (Chavannes and Mont-Chery) seem relatively small, but don’t be thrown by that, as there’s much more to Les Gets than is first apparent. Les Gets itself is linked with Morzine and the whole area is included in the local lift pass and between the two resorts, there are around 50 lifts. The ski area is surrounded by beautiful tree lined runs which mainly consist of blues and reds. There is also a terrific area accessed via the Chavannes lift known as “The Bowl” into which numerous ski runs and chairlifts feed.

Mont Chery is Les Gets jewel in the crown with black runs and numerous reds and a fantastic snow park for those who like to throw themselves off things! If you are more adventurous you may wish to upgrade to a full area Portes du Soleil ski pass to explore more of the Portes du Soleil. This will enable you to ski over into Avoriaz and then onto Switzerland taking in resorts such as Les Crosets and Champoussin. This is a fantastic ski area, and well worth considering for those who like to cover large areas. Travel from Les Gets to Avoriaz takes around 90 minutes depending on your experience level.

Accommodation in Les Gets is generally of reasonable value with self-catered and catered chalets, apartments and hotels all vying for your Euros and we are here to help advise suitable options. There is a good choice though to suit almost any budget and there is just about enough nightlife for all but the most ardent party seekers, for which Morzine would be the better option.