Mayrhofen is an attractive, traditional and large village in the scenic Ziller Valley, in the heart of the Tyrol. It’s one of the best known names in Austria and is very popular with the Brits, Scandinavians and the Irish, who enjoy its great mix of authentic Austrian ambiance, good skiing/boarding and very lively nightlife. Mayrhofen’s village has managed to retain much of its traditional character and charm, whilst it has grown into a larger and livelier modern resort. Most of the buildings have the classic Tyrolean chalet design, so the town replicates people’s image of a picturesque Austrian mountain town. 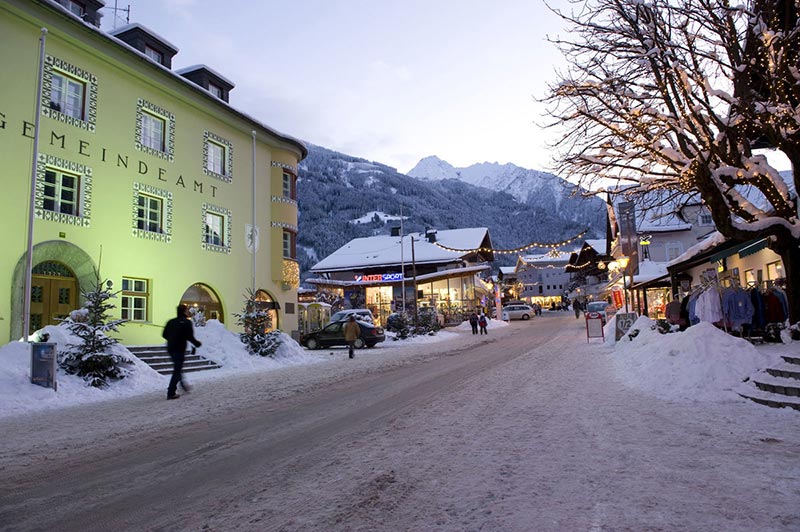 Mayrhofen’s local slopes cover two separate ski areas, with the lifts accessing both, based just 200m apart at the southern end of the resort’s main street. The smaller area is the Ahorn to the south, served by the impressive Ahornbahn cable car and the larger area is the Penken to the west, served by the Penkenbahn gondola. A regular free ski bus service runs between the two lift terminals and serves the central and outlying accommodation zones of the resort.

Mayrhofen’s principal Penken ski area is accessed via a gondola based next the Ziller river, just off the main street. Access to the slopes is also possible via two further gondola lifts at the bus-linked neighbouring villages of Hippach and Finkenberg, the latter being about 4km away.

The Penken area covers the linked slopes of the Penken, Horberg and Rastkogel mountain sectors, shared with the linked villages and offers a fair extent of great blues and lots of testing reds, together with a few black runs including the infamous ‘Harakiri’ – classed as the steepest piste in Austria, with a pitch of 78 degrees. The area’s snowpark – the Vans Penken Park – is one of the best in Europe and certainly THE best in Austria and continues to improve each season, making Mayrhofen a Mecca for snowboarders and freestylers. The Penken area is also lift-linked with the slopes on the Eggalm above Lanersbach, extending the range of the skiable area and again mostly featuring steepish reds.

However, there are no pistes running back down to Mayrhofen, only un-pisted ‘ski routes’ to valley level at Finkenberg and Hippach, when snow conditions are good. This lack of lower runs has an impact on lift queues, which can be long for downloading at the end of the day, but that never seems to put people off and adds more to the party atmosphere!

Mayrhofen’s second ski area is on the opposite side of the valley, on the Ahorn mountain. The Ahorn is great for novices and is directly accessible from Mayrhofen via a cable car. It has an extensive beginners area next to some perfect blue runs, served by a fast 8-seater chairlift and has a couple of T-bar served blues and a short red for building skills. The attraction here for better skiers is the excellent 5.5km long red run all the way from the summit down to valley level.

Mayrhofen is also a member of the Zillertal Superski group of resorts, whose full area lift pass also covers three further ski areas in this region, including the year-round slopes on the Hintertux Glacier at the head of the valley. Check out Zillertal.at for more information on the extent of the ski areas and where your ski pass covers. The immediate ski area offers just under 200km of pistes but the extended Zillertal ski pass adds on at least a further 300km, all accessed by the free shuttle.

Mayrhofen village is spread out along the valley, so it’s an easy place to stroll around. There are lovely walks in the area, particularly along the banks of the Ziller river and guided snowshoe treks up into the mountains are also available for those who want to see higher surrounding scenery. Horse riding and horse-drawn sleigh/carriage rides are other more romantic ways of sightseeing. Other active off- slope attractions include an ice rink; an indoor climbing/bouldering centre; a fitness studio and a large aqua-leisure centre with indoor and outdoor pools, jacuzzi, saunas and steam room.

As you can imagine, with being so popular, there’s a good choice of restaurants, many of them offering Tyrolean food but also a fair number of international favourites too, including Italian, Mexican, Chinese and Thai. Apres ski though is one of Mayrhofen’s key attractions and like many in Austria, the action starts a couple of hours before the slopes close, in the slope-side venues by the main upper lift terminals and continues in the bars nearest to the base terminals as everyone starts to download to the town. The Pilzbar and the Elchbar are the prime spots at the top on the Penken side, whilst the fabulous White Lounge at the Igloo Village at the top of the Ahorn also offers accommodation, so you could even carry on partying overnight up on the mountain…as many do.

Down in the village there are numerous pubs, hotel lounge bars, music and disco bars, plus a couple of larger nightclubs: some of the more upmarket lounge bars are perfect for a quiet drink, the vast majority of the other venues are busy and rocking from early evening until the we small hours of the morning. The Garage and Apropos are regularly the last bars to close, the Sport Arena and Schlussel nightclubs party-on until the early hours of the morning.

Accommodation options are plentiful and often good value compared to St Anton and Ischgl, mainly consisting of 3 and 4 star hotels and apartments, with a few chalets and larger homes to boot, both here and in Finkenberg. Not many catered chalets are offered, but we have 3 or 4 bespoke options for those interested, with just the one main larger catered chalet which has over 20 bedrooms in Mayrhofen and a 12 bedroom catered chalet in Finkenberg, though this may change season to season.