Meribel is the heart in arguably the world’s largest lift linked ski area, the 3 Vallees, (though the Portes du Soleil argue that is the largest lift linked area). It is an attractive chalet-style, modern, purpose-built ski resort and the combination of great skiing, first class location, forest setting and the pretty chalet-style village helps make Meribel one of the most popular destinations for British skiers and boarders in Europe. Easy to get to as well from Geneva, Grenoble, Chambery, Lyon and on the train from Moutiers. 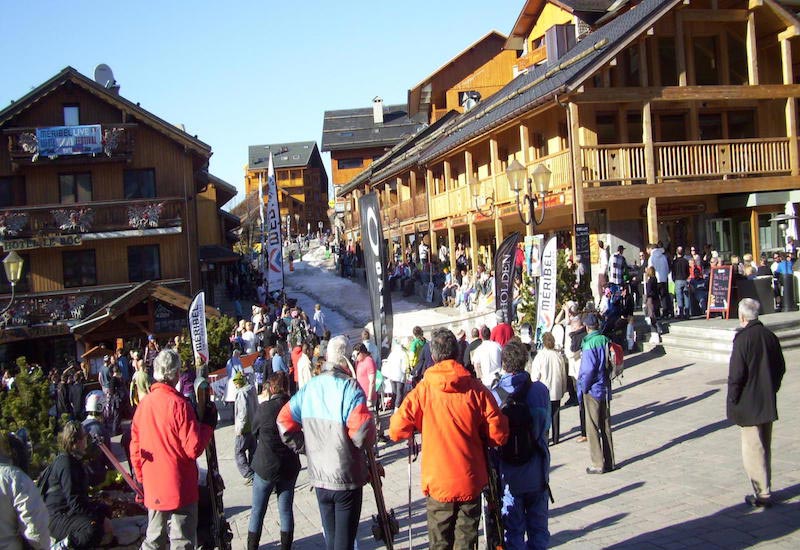 Meribel is very popular with the British market and large swathes arrive each winter, with those with a higher budget generally staying around Meribel Centre, those with a lower budget generally staying at Meribel-Mottaret, whilst Courchevel in the next valley is popularly regarded as being a tad more French, more chic, a little more up market and consequently… more expensive. For pricing the lower down valley you are the cheaper it is to stay.

Meribel’s location helps skiers staying there to make the best of the Three Valleys. On the eastern side you have classy Courchevel’s fabulous skiing and on the western side you have the higher altitude slopes of Val Thorens with Les Menuires and St. Martin below it, in the Belleville valley. Meribel’s own central valley runs north to south and so skiers can keep in the sun all day, with the whole valley in the sun over lunch. La Tania is the other main village which completes the circuit.

The choice of skiing here is substantial, with 150 km of pistes in the Meribel Valley alone and around 600km in total, including all the interlinked neighbouring valleys, which being quite high offers more of a realistic chance to actually ski all the areas, through more consistent snow conditions and connections to the other valleys being higher up.

Downhill choices are as close to limitless as they can be and, whilst the 3 Vallees is often referred to as an ‘intermediates’ paradise’ there is really plenty for experts to enjoy too, such as the off-piste Mt. Vallon face above Meribel-Mottaret or the legendary black runs of Les Bosses. The Women’s Olympic Downhill run offers challenges, especially at speed and there’s lots of fun to be had in the powder or treeline skiing.

Easier choices include the 3.6km long red run down the Combe du Vallon or the Pic Noir descent through the trees from Col de la Loze. Beginners have easier runs up by the Altiport and Rond Point des Pistes, as well as a special beginners’ area at Meribel-Mottaret. There are a number of Ski schools too, which generally have a good reputation and with such a choice we mainly recommend New Generation, SkiBro and Oxygène, for all ability levels.

Meribel tries to appeal to families – for instance the swimming pool with its big water slide. Children up to age 12 get a discount on their pass, though all children over 5 having to be paid for. Ski pass offers though include a family ticket with discounted prices for children up to age 18. Accommodation options are wide and varied with many catered chalets, self-catered apartments and 3 and 4 star hotels, with a number of convenient ski in ski out options. Pricewise accommodation options can pretty well suit almost any budget. We offer a good few on our website but please email us to help you find your ideal solution.

With any young ones with you, there is now a good nursery at the Olympic Park development, which takes children from 18 months to 3 years of age and has its own cafe on site. There are also three snow gardens organised by the ESF ski school and some of the hotels offer childcare facilities or children’s entertainments. Several tour operators also organise their own day-care and the tourist office provides a baby sitter list. We are happy to advise where we can.

As for doing what the locals do, local speciality drinks include the ‘grolle’ (a mix of coffee and eau de vie) whilst there’s ‘Tartiflette’ – a bacon and potato gratin topped by Reblochon cheese, to sample for lunch or after skiing. For desert there is the specially created ‘Meribellois’ – a meringue, almond and chestnut biscuit. France in general is also renowned for its raclette options of melted cheese onto potatoes and/or ham/other meats. Yummy. With over 100 eateries to choose from the choices are once again vast, ranging from cheap and cheerful to top notch … a la carte. The vast majority however are more cosy traditional-style smaller establishments, serving Savoyard and Alpine favourites.

Meribel has some of the liveliest apres of any French ski resort – as long as you stick near the village centre. Jacks Bar, Le Rond Point and O’Sullivans are perhaps the best known with fun and dancing until the wee small hours. Meribel-Mottaret and the other outlying neighbourhoods are mostly quiet, but still fine if you don’t want to be out much beyond midnight.