Montgenevre Ski Resort is situated just a few hundred metres from the border with Italy, on the French side to the small Italian ski resort of Claviere to which it is linked. Montgenevre is the only French resort in the expansive Via Lattea (Milky Way) ski area, where the remaining resorts are all Italian, including Sestriere and Sauze d’Oulx. Montgenevre was one of France’s pioneering ski resorts, from 1907 when it hosted one of the first ever international ski-jumping competitions. This historic resort retains its pleasant old-world ambiance and continues to shine as a key winter playground in this region. The high pass between France and Italy has a good snowfall record and as such Montgenevre often boasts the best snow conditions in the Milky Way and usually opens a week or two earlier and remains open a week or two longer than most of its Italian neighbours, making it a pretty safe choice for early and late-season ski trips. The actual village sits at 1850m so actually puts it on a par with Courchevel and Les Menuires, with the highest lift at 2700m. 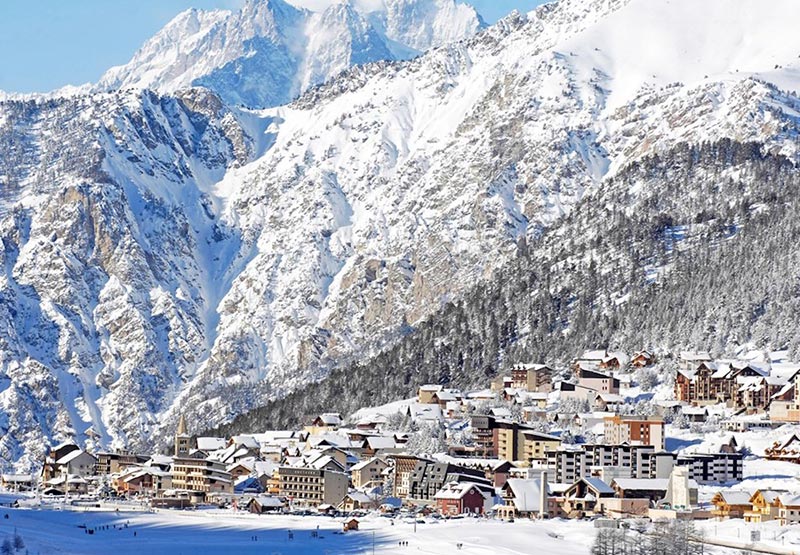 The layout of Montgenevre village is quite convenient as regards access to/from the slopes, although its linear form does mean that key inter-sector lifts are some distance apart at opposite ends of the resort and separated by lengthy flat sections. The central base-area slopes offer a sizeable beginners’ area and children’s zones; the resort’s halfpipe and airbag jump zone are on the slopes just above these and there is a centrally positioned chairlift serving the wooded mid-altitude slopes of Le Prarial beyond, which has several short but steep red runs pointing back at the village.

Novices can also use this chair to access a couple of longer green and blue routes via the less steep flanks of this same hillside. Links to the nearby Italian border to the east are very straightforward, with a very easy gradient on the final section of the seamless link to Claviere; from there intermediates can explore the slopes of the Monts de la Lune (Monti della Luna) ski area on Italian territory and head out towards the other Via Lattea resorts. The rest of the local Montgenevre ski area contains a nice mix of terrain ideal for intermediates and improving novices: ranging from gentle long trails, wide and rolling cruises, open bowls and some wilder and steeper high passes, spread over the mountains on both sides of the village; the principal two access lifts serving these twin areas are modern ‘Chondola’ gondola/chairlift hybrids. With a bit of local knowledge and careful route-planning it’s also possible to ride in an on-piste circuit between the two sectors, thanks to a pisted footbridge across the bisecting main road.

The focal point for alternative activities in Montgenevre is the resort’s outdoor ice rink at the eastern end of the Front de Neige area; there’s a snow-tubing (rubber rings) and sledging piste on the slopes above. Snowmobile excursions and snowshoe treks also depart from this area. Other highlights include an exciting 1.4km monorail toboggan ride that starts at the top of the Chalvet gondola on Montgenevre’s northern slopes; and a tree-top adventure trail in the woods at the lower western end of the resort.

Accommodation pretty much centres around hotels and apartments. Some of the newer hotels have small spas and beauty salons which are open to non-residents and there is an excellent aqua-leisure centre available for everyone. Numerous apartments have sprung up over the last few years and you will find prices more attractive compared to the bigger name resorts but make no mistake this is very much an underrated superb resort with 100km of immediate skiing and 400km of interconnected skiing with Italy. I think you may well find that one visit here isn’t enough!

Apres-ski hours are fun but mostly low-key, focused on ‘happy hour’ drinks in the resort’s handful of centrally located bars and cafés; later on in the evenings during high season these same venues can often get quite lively, with Le Graal usually the prime venue, but a laid-back café-bar culture is the most accurate description of the ambiance of Montgenevre’s nightlife and attracts more couples and families where a lively apres ski atmosphere is not of the highest importance.