Soll has long been one of the most popular ski resorts for British visitors to Austria. Soll is part of Austria’s extensive SkiWelt region and has traditionally been sold as an ideal destination for the young, beginners and mixed-ability groups, as well as families with young children. This is because the resort offers good-value accommodation, valley-level beginners’ slopes, very lively apres ski and nightlife, a small, pretty village and separate children-only ski area. The village itself is sited around 700m away from the ski base-area, slopes and sole access gondola lift terminal, requiring a walk or ski-bus journey every morning and afternoon to/from the ski area. This sector of the SkiWelt ski area also has very few blue pistes, unlike say Westendorf, so natural progression slopes for newby or improving skiers are somewhat limited. 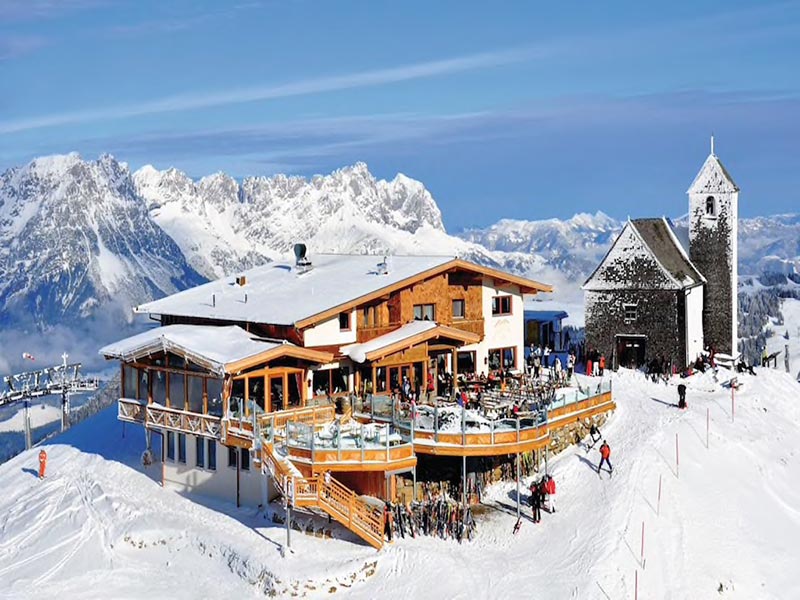 Soll is therefore actually best suited specifically to intermediates, who are best able to make the most out of the steeper gradients, the longer descents and the significant number of km possible on excursions out into the other linked sectors of the SkiWelt domain, such as over to Ellmau, Scheffau, Westendorf or even over to Kitzbuhel, the total area being around 280km.

Soll’s local ski peak is the Hohe Salve (1829 m), the highest point in the core SkiWelt domain, shared with the neighbouring resort villages of Itter and Hopfgarten. With the highest-altitude slopes, this area can generally offers the best snow conditions in the SkiWelt region. The Hohe Salve areas also have the greatest concentration of intermediate and advanced-level pistes, with the steepest terrain and the longest non-stop descents. There are a few short black runs in the summit sector, including one which links via a red-graded mid-section to a tough descent all the way down to the village of Brixen im Thale at the opposite southern side of the core SkiWelt domain; the majority of pistes in the Soll sector though are easy-to-fair red runs, including a ‘home-run’ to the base area at Soll’s gondola terminal.

Confident novices can also ski down to this valley-level base area, via a long blue run that follows the route of a forest trail down from Soll’s mid-altitude area and lifts hub at Hochsoll; other options for novices in this sector are less straightforward though, with most links only possible via red-grade pistes, albeit none of them too difficult.

The attractive old village centre of Soll is set back from the main valley through-road and gets light traffic, making it a pleasant place to stroll around. Low-rise chalet-style houses and hotels are clustered around Soll’s solid baroque onion-domed church, with just a single ‘high street’ offering a smattering of small shops, bars and restaurants. For such a small-scale place though Soll does have a disproportionately wide range of pubs and bars, many of them very lively from early evening until the wee early hours. Soll does “rock” after skiing and is thus less of a quiet place if peace and quiet at night is your want. Typical Austrian sing-along and table-dancing apres ski happens at the base area of the slopes, the prime venue here being Moonlight’s; later on the action moves to the pubs and music-bars in the village centre; the big Whisky-Muhle club just outside the village is also one of this region’s most popular nightspots.

Anyone looking for a more sophisticated apres-ski experience and/or after-dinner wind-down can choose from a number of quieter lounge bars in some of Soll’s more upmarket hotels. Alternative activities and attractions include a floodlit long toboggan run served by Soll’s gondola, ice skating and curling on a nearby frozen lake, horse-drawn sleigh rides, and the recently renovated Panoramabad aqua-leisure centre. Accommodation centres around mainly hotels and apartments with the odd larger self-catered or catered chalet and we are only too happy to help advise. Flights into Innsbruck or Salzburg would generally be recommended if you choose to stay in Soll.